Jenni moved from Australia to the US in early 2016, bringing with her, her home-bred Arabian mare Jensems Suzie Q.  Prior to moving, Jenni had been involved primarily with Arabian horses, including purebreds, Anglo Arabians and Arabian Warmbloods. She operated her own small breeding program as well as working on several large breeding farms.  She holds a Bachelors of Applied Science (Equine) from Melbourne University.

Since moving to the US, Jenni fast established herself as a force to be reckoned with in the Arabian Sport Horse scene, winning National Champion Arabian Sporthorse (AOTR) at the 2016 championships, along with several other National titles.  Since then, Jenni has continued to claim many Regional and National titles.

Jenni’s training philosophy has a foundation in classical dressage, with continued learning in correct biomechanics in order to create a balanced, relaxed horse for long-term health and soundness.  She enjoys teaching beginner and amateur riders, taking time to explain the “whys” as much as the “hows” of correct riding and training, all with a relaxed, positive and encouraging approach.  She maintains a small team of horses to ensure a personal service for each horse and rider, occassionally having training positions available.

Training out of the lovely Scotsman Center in Mountain Green, Utah, visitors are always welcome and enquiries for training are invited. 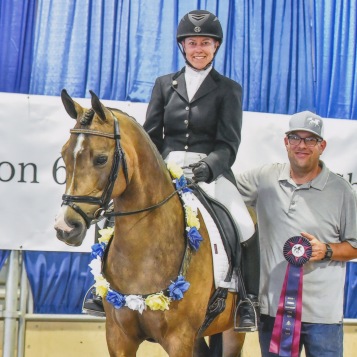